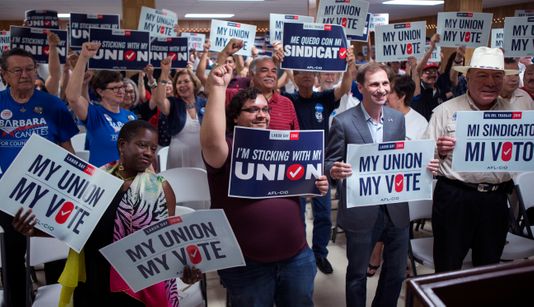 The Democratic challenger for Texas Attorney General was this year’s keynote speaker for the 61st annual Labor Day Breakfast in Corpus Christi.

The event, hosted by the Coastal Bend Labor Council, let local union members come together with elected officials and political candidates to talk about workers rights.

The atmosphere of the room shifted from a community get-together to a rally as the speakers took the mic. The standing room-only event had candidates like Barbara Canales get cheers, while a video from Democrat Beto O’Rouke kicked off chants.

Nelson is a trial lawyer and law professor at the University of Texas-Austin who has never run for office before. His family has roots in Corpus Christi, as his father, Eric Nelson, was a lawyer who fought for labor unions and desegregating public schools while his grandparents founded Delta Resturant Supply.

Paxton has served as attorney general of Texas since 2015.

The breakfast saw candidates from all levels and all seats come to eat with union members. District Attorney Mark Gonzalez gave the pledge of allegiance, while candidates Eric Holguin and Canales spoke before Nelson’s keynote speech. ,

The annual breakfast was meant to celebrate its 60th year , but that was interrupted by Hurricane Harvey, prompting the members to go out and help in the days after the storm instead.

“Today we want to celebrate workers and we want to remind the world of the dignity they give to us by bringing our community back after a tragedy or crisis,” Kristie Veit, president of the Coastal Bend Labor Council, said. “Working folks are the ones that make the world go round.”